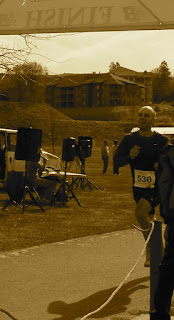 My first race was this year. It was a 10k in my own home town of Oliver, BC. One of the great draws was that every entry got a bottle of wine from a local winery, which our town is famous for making copious amounts of. Yipee! It's like Canada's little Italy.
I had only ever ran a race before in grade school. My one memory of this was the pride I had in a cross country run in grade 6. I was placing 9th I believe. I have always enjoyed running even then. At the last turn of this run in which I was doing so well, I made a terrible mistake. Some people were flagging me down calling me over, to which I misinterpreted as the right direction to run. It wasn't. Instead, I cut across a field I was supposed to be circling, and then had to double back to get back on track. Thanks a lot, idiots! So my placing slid into the droves of other kids that did NOT make that mistake.
That was my only memory of running in a race until my grade 12 year when we had a track meet school wide. An 800 meter dash , which I thought I could handle, turned into an embarrassing drop out due to a crazy bad asthma attack. I have asthma by the way.
This race was different.
Here are a couple of my own observations from the race experience. First, the crowd being so tight at the beginning was a challenge. Just trying to weave without being too jostled and to maintain my own pace rather than a pack pace was off-putting. The next thing was my own inner dialogue! I realize...I AM VERY COMPETITIVE. Internally, I want to take down anyone in front of me. I hated the sound of approaching footsteps from behind. Mentally, my desire fro personal excellence gets thrown out the window for the sake of just kicking ass. This is a discovery of great importance for me. I have alway gravitated to sports that are individual. This way I could avoid comparing myself to others accomplishments.
At 35 years old, I was entering it totally prepared and experienced in the length and knowledgeable to a degree of how I would do. My goal was to a time of a sub-45 minute run. My personal best as far was 42:30. But I know myself. I know my nerves would definitely try to usurp my training. I get anxious and over think everything. This makes me hyper aware of how tired I feel, and psychologically plays against me.
I had two friends running the race as well. One I knew was much faster than me as we run occasionally together. He was the man who I found to be very inspirational in keeping at my discipline for the long haul. The other gentleman was a local principle of a high school, and from talking I knew I would place before him most likely.
The people who showed to the race were such a great way to connect to the bigger world of running. There was a diverse array of ages, levels and backgrounds. I met people I knew but had no idea they were runners.
Trying to take it easy on the first split turned out harder than I thought. I did run out of steam,but pushed trough that weariness to make a time of 43:20. A respectable time for my overall goal.
Things I didn't expect that I will know for next time: I will be very sore the next few days after. There will be people with elbows crowding me. A negative split requires patience and discipline in training so that race time will be more automated. People at the races are on the whole just excited to be around other runners. For myself, my goals are the most important thing, not the outcome on the whole. Although now I have a better idea as to what time and effort it will take to place more competitively. This is a revelation. I want to run a sub 40 minute 10 k.
Posted by Chad at 8:39 AM 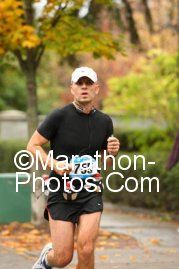